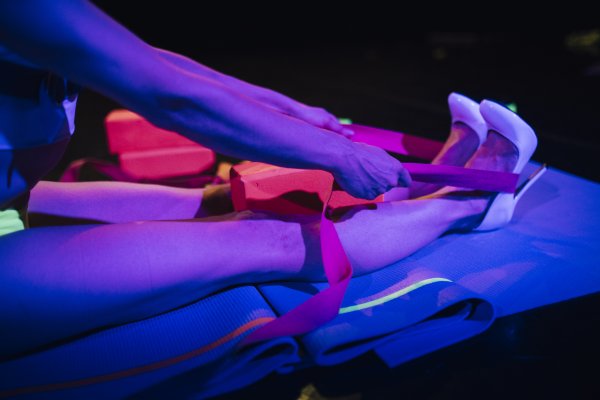 The following performances are omitted due to the new Corona measures

This double-bill in the Kleines Haus in Wiesbaden is dedicated to the works of two dance choreographers with an interest in the cultural influences on the body.

Spiritual Boyfriends is a solo performance about body-power relationships and their structures. The work of Núria Guiu Sagarra is based on an iconographic investigation of the historical construction of yoga postures as well as autobiographical material around the subject of affection and desire. In a discourse about spirituality, Sagarra reveals categories such as power and control as reciprocal forces that are both imposed on and intrinsically generated by bodies. Digitally, she creates an additional space in which impulses are released in a drug-like manner in the form of a collective psychotropic, evoking the notion of the soul as a divine entity that releases the materiality of the body in a fleeting, virtual, informative, and energetic way. At the same time, it raises questions about the role of the Internet with its techniques of control and surveillance in relation to the divine, to immateriality, love, power, and to neoliberal politics.

Due to the increased number of COVID-19 cases in the Czech Republic and the associated travel restrictions, FLY! von Markéta Stránská unfortunately will not take place. Spiritual Boyfriends of Núria Guiu Sagarra continue on November 12th and 13th. shown, now as a single evening.