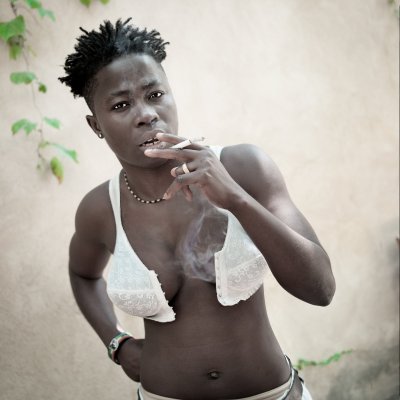 Struggle, women, freedom – in Quartiers Libres / Performance, which premiered in 2012, the choreographer Nadia Beugré confronts us with ideas and facts we’d rather suppress.
A strong dancer who sings, dancers and sometimes bellows. She threatens to get caught up in the endless microphone cable that winds around her neck like a snake. A world of garbage stands in her way. She struggles free, empowers herself and struggles to reach the people around her. For while Africa is drowning beneath a mountain of plastic, the global north remains inactive, apathetic and uninvolved.
It’s this very lack of commitment that Nadia Beugré wishes to turn around – by mixing with the audience. With her body she very directly expresses all the things that can’t be said, feelings that are to complex. Carried by nightmarish sounds, in her solo she clears a space in which the cry of an African woman for justice can be heard.