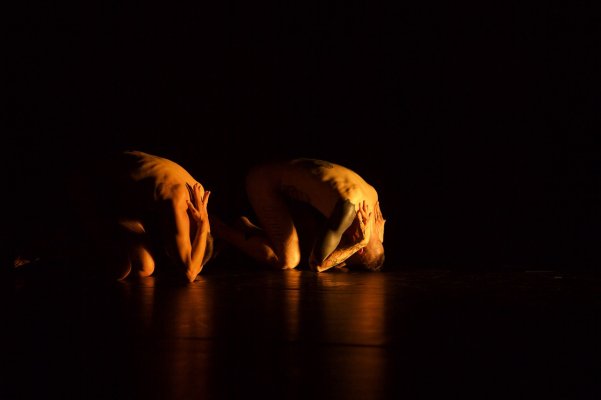 The following performances are omitted due to the new Corona measures

Language no problem
Length: 55 Min.
The audience is asked to wear a mask during the entire performance.

A loving smile that mutates into a devilish grin. Two bodies, shaken by eruptive explosions, trembling and twitching, vulnerable and full of energy at the same time. The Bessie-award winning piece Glory by Berlin-based choreographer Jeremy Wade continues to be of rousing intensity even in its fourth adaptation. An unconditional, naked duet in which Wade and dancer Sindri Runudde live through the brutality that norms exert on the body. To the stirring electro sounds of Lou Drago, two bodies struggle with agony and ecstasy, developing a dance of non-belonging in which the opposite poles of shame, remorse, humiliation, intoxication, and finally submission and surrender are transformed and disrupted.

A Jeremy Wade production. Supoprted by Dance Theatre Workshop and Jerome Foundation's First Light Program. Thanks to Springdance and Tanztage Berlin. The neu adaptation was made possible by the City of Berlin’s Department for Culture and Europe. The performance in Frankfurt is funded by the NATIONALE PERFORMANCE NETZ (NPN) Guest Performance Fund for Dance, which is funded by the Federal Government Commissioner for Culture and the Media, as well as the culture and art ministries of the federal states. Part of the series “Corponomy – Politiken des Körpers in Tanz, Performance und Gesellschaft”, funded by the Bundeszentrale für Politische Bildung.